The enlarged Rockwell painting covers the entire back wall of the lobby. While President Nixon was an imposing figure, Norman Rockwell was himself pretty amazing. 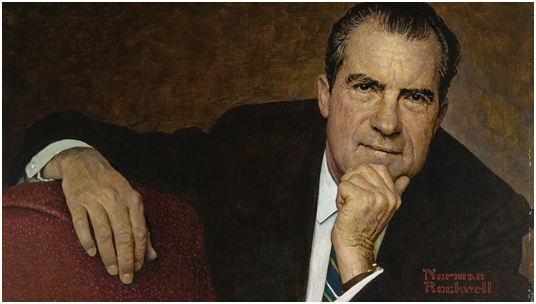 Rockwell’s family moved to New Rochelle, New York, when Norman was 21 years old. They shared a studio with the cartoonist Clyde Forsythe, who worked for The Saturday Evening Post. With Forsythe’s help, Rockwell submitted his first successful cover painting to the Post in 1916, Mother’s Day Off (published on May 20).

Ultimately, Rockwell published 321 original covers for The Saturday Evening Post over 47 years. His covers on the Post led to covers for other magazines of the day, most notably the Literary Digest, the Country Gentleman, Leslie’s Weekly, Judge, Peoples Popular Monthly and Life magazine.

Rockwell said Nixon was the hardest man he ever painted, even though he voted for him, because of a “mean eye” and his jowls.

Artist Norman Rockwell admitted that he had intentionally flattered Nixon in this portrait. The reason he did, Rockwell said, was that Nixon’s appearance was troublesomely elusive, and if he was going to err in his portrayal, he wanted it to be at least in a direction that would please the subject.

Norman Rockwell (1894-1978)
Oil on canvas, 1968
National Portrait Gallery, Smithsonian Institution
Donated to the People of the United States of America by the Richard Nixon Foundation

1968 Portrait Owned by the Nixon Foundation, donated to the Smithsonian Institution and shown in the Richard Nixon Presidential Library Lobby.

Rockwell’s last painting for the Post was published in 1963, marking the end of a publishing relationship that had included 321 cover paintings. He spent the next 10 years painting for Look magazine.

During the two-hour event we'll take you through the galleries,[...] 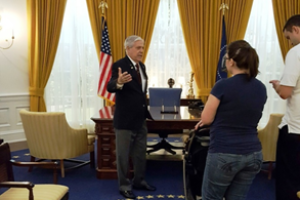 Docents walk the walk and talk the talk

For Docents, a typical day at the Library involves plenty[...]

Your email is safe with us.

We're currently offline. Send us an email and we'll get back to you, asap.